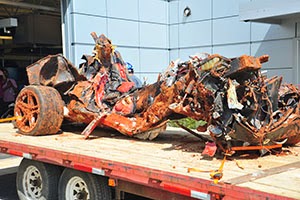 The last of the "Great 8" Corvettes has been pulled from the depths of the 40 foot wide by 60 foot deep sinkhole that collapsed within the Skydome building of the National Corvette Museum exactly eight weeks ago, marking the end of the first phase of rebuilding.

"We're happy to have the completion of our major goal to recover all eight of the Corvettes," said Wendell Strode, Executive Director of the Museum. "Next week we have a meeting with all the major players, including the construction team, geo-technical firm, cave and karst specialists, engineers, our insurance company and others to review all the findings and have discussions on the next steps and a mutual understanding about rebuilding."

The 2001 Mallett Hammer Z06 was one of two Corvettes that's whereabouts were initially unknown after the sinkhole happened. The car was finally discover this Monday, upside down with the nose pointing towards the red Spire in the center of the room. It is, by far, the most heavily damaged of all eight Corvettes.

"It looks like the worst one... a lot of parts and pieces," said Mike Murphy, CEO of Scott, Murphy and Daniel Construction. "It took a lot of punishment from a lot of big rocks."

The Mallett Hammer was donated to the Museum this past December by Kevin and Linda Helmintoller of Land O' Lakes, Florida, Lifetime Members of the Museum and previous R8C Museum Delivery participants. Upon hearing the car had been located, Kevin traveled to Kentucky to witness the rescue operation. "I expected bad, but it's 100 times worse," he said. "It looks like a piece of tin foil... and it had a roll cage in it! It makes all the other cars look like they're brand new."

Strode had forewarned Helmintoller that the car would be in bad shape and he might not want to watch the recovery process. "Honestly though, I'm still glad I'm here because I would have never believed it was this bad. I'm not positive I would have recognized it - there are just a few little pieces that give it away."

Helmintoller added that he sent pictures of the damaged car to his engine builder, who (jokingly) was quick to point out that the motor was not covered under warranty.

Kevin and Linda spent 13 years modifying the Corvette, a car they purchased new in 2001. The Mallett Hammer conversion was completed in June 2002 and since then has had many AntiVenom LSX Performance modifications with the car boasting 700hp with 575 torque at the flywheel. The car's speed achievements helped it score a cover of GM High Tech Performance magazine.

"We donated this car to the Museum to help with the continued growth, but also because it could be a good vehicle for training other drivers at the new NCM Motorsports Park," Helmintoller said in December upon donating the car.
A “Great 8” display will officially open next week in the Museum’s Exhibit Hall and the sinkhole Corvettes will be available for viewing, as-is, through the Museum’s 20th Anniversary Event August 27-30, 2014.

Links to photos, videos and information related to the sinkhole are available on the Museum's website at www.corvettemuseum.org. For the latest updates visit the Museum’s Facebook Fan page at www.facebook.com/corvettemuseum.
Posted by Corvette Museum at 3:00 PM

Corvette Museum
This 115,000 sq. ft. showcase to America's sports car features over 80 Corvettes showcased in periodic settings including a mid-century barbershop, service station and historic race track! See classics in mint condition, one-of-a-kind prototypes that never went into production & modern-day wonders of engineering and design. Interact and test your skills by fueling up and changing tires at the "Pit Crew Challenge" exhibit, enjoy a film in the Chevy Theater and see rare collectibles and memorabilia. Sit behind the wheel of a Corvette and register to drive one home. Enjoy shopping in the Corvette Store which offers a wide selection of apparel, collectibles, home and gift items. Open daily, 8am-5pm.